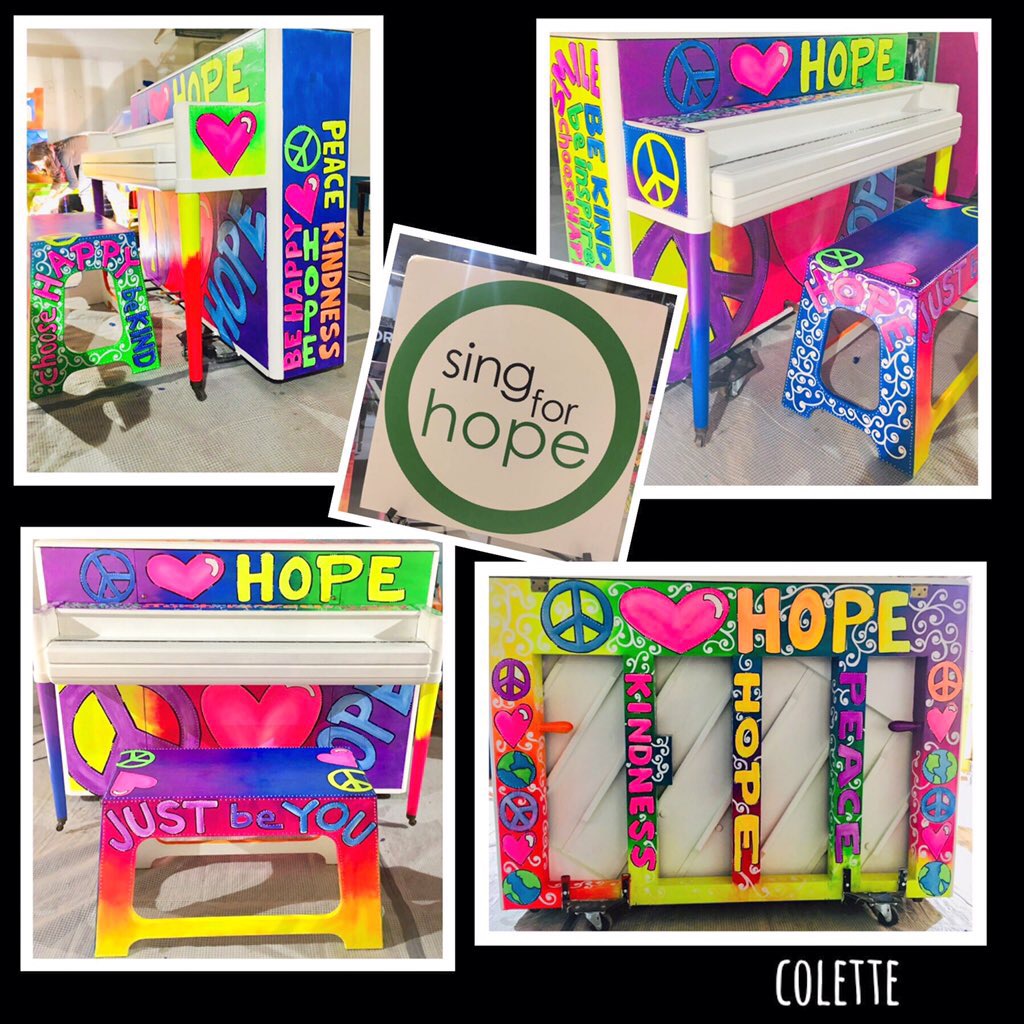 Peace, Love and Hope: Message of piano continues to be important

In springtime in New York City, palettes of color emerge in rampant beds of tulips in Central Park, fields of bluebells in Brooklyn’s Botanical Garden, and daffodils in backyards in Queens.

And then there are the pianos.

Yes, since 2006, springtime in New York has meant the appearance of 50 pianos painted by talented artists and available for the public to play. Although this year’s pandemic prompted suspension of the program, more than 500 pianos have been set out since this public art movement began, creating community and inspiration.

East Williston art teacher Colette Hardy was among last year’s artists whose spring pianos appeared throughout the five boroughs as part of the annual Sing for Hope piano project. SFH is a non-profit group that brings music to the public. Hardy’s vibrant “Peace” piano was set out at Brooklyn Bridge Park.

“My idea was to support peace, love and hope,” she said. “I wanted something bold; something with a positive message.”

Hardy had successfully applied to be an artist for one of the pianos displayed in public spaces for three weeks. She spent three months commuting from Long Island into the city to sand, prime and paint the piano on weekends, alongside other artists from around the world in a shared studio space. Her union, the East Williston TA, gave her a budget to purchase her needed supplies.

“She’s an example of teachers and their passion for what they do,” said Meryl Fordin, president of the EWTA. “Art is a pretty important part of education, and sometimes it’s woefully underfunded.”

That’s a tune that Sing for Hope recognizes. After the pianos are displayed, each one is tuned and refurbished, then donated to a public school. The artists visit the school where their piano ends up.

“We spoke to them about art, music and kindness,” Hardy said about her visit to the Brooklyn preschool where her piano now lives.

While the pianos are out in public spaces, each one has a volunteer piano buddy, who gets an alert when the weather forecast predicts rain, and puts a custom cover on the piano. And meanwhile, anyone can come along and play and sing, as many individuals and groups did with Hardy’s piano.

“There were students from (East Williston) who went with their parents to play my piano,” Hardy said. “It’s a neat project to share with my students, to inspire them to do something for the sake of doing it.”