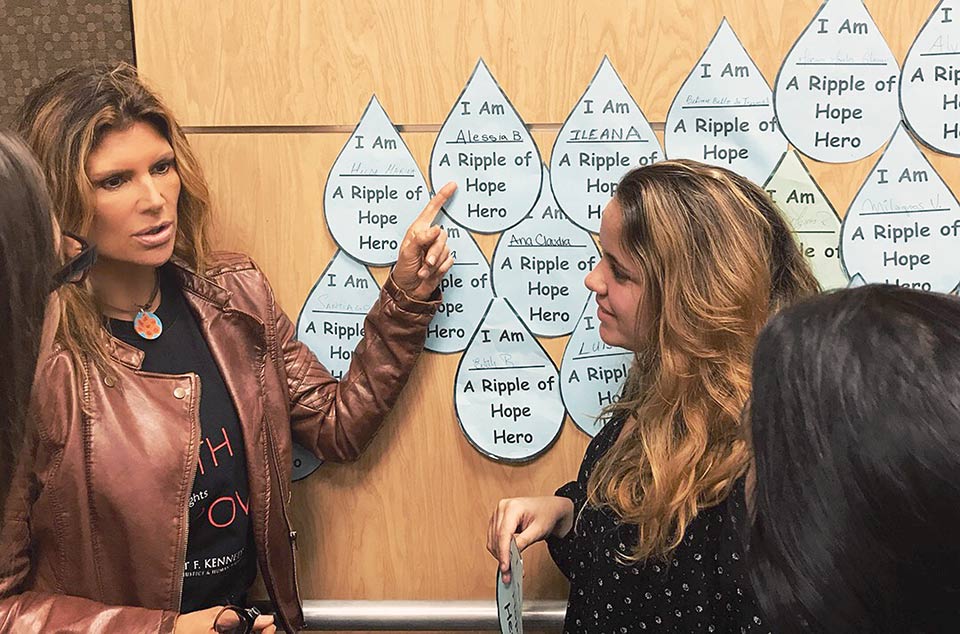 It all started with chocolate.

Learning about children being exploited as workers on cocoa farms gave teacher Pamela Mary Schmidt a taste for making change. Chocolate on the mind can be as strong as chocolate on the tongue.

As an educator now teaching in Freeport, she has had many transformative moments in the classroom, but it was her introduction to human rights work while teaching in Brentwood in 2009 that she says changed her life.

“I like to teach by connection to real-world events, so near Halloween I created a Fair Trade unit based on the cocoa industry, working with Anne Kelly (former longtime New York State Labor-Religion Coalition staffer),” Schmidt said. She had her eighth grade English students write a poem from the perspective of the exploited children working the cocoa farms, and showed them the documentary, “Stolen Childhoods.” Children their age and much younger were working endless days in fields, their small bodies deprived of so much.

Later that fall, a Labor-Religion Coalition crew of Kelly, Maureen Casey and former NYSUT Secretary-Treasurer Lee Cutler, visited Schmidt’s classroom to discuss human rights and Fair Trade. Cutler was attending an event at the Robert F. Kennedy Center for Human Rights that night, and Schmidt gave him the students’ poems to give to Kerry Kennedy.

Their work was received, and reciprocated: Kennedy, director of the RFK Center, visited Schmidt’s classroom. Students read her poems they had written, choosing words and feelings based on the human rights defenders featured by photo and story in Kennedy’s book “Speak Truth to Power.” The overarching question posed in the poetry was: Are certain people invisible?

By now, Schmidt unequivocally knew the answer to that question was a very loud, insistent “Yes.”

By now, she had the taste of coffee in her mouth, as well as chocolate. In February 2010, Schmidt traveled to Nicaragua with a Fair Trade delegation including NYSUT and Labor-Religion staff. They visited schools and advocated for children being exploited in the coffee industry.

Not letting any dust settle, Schmidt was asked to be part of a curriculum writing team of NYSUT educators who wrote lesson plans for Speak Truth to Power during the summer of 2010.

As a result of writing those lesson plans, Schmidt learned about a group of children in Haiti being helped by defender Loune Viaud.

“I wanted to meet those children,” Schmidt said. “I wanted to do something with them.” That summer, she joined Partners in Health to travel to Haiti.

Viaud had found children in a hospital who were not sick, but were disabled or abandoned, so she hired caregivers for the children. When Schmidt arrived, she began documenting the oral histories of these caregivers, and had the children express themselves through art.

Since 2012, Schmidt has been teaching in Freeport, where she is a member of the Freeport TA.

A seasoned traveler familiar with schlepping art supplies and going for long hauls across oceans and continents, Schmidt has been to Haiti 18 times, Nepal three times. Her work has also encompassed helping Venezuelan refugees. Through a contact with an RFK defender, she has traveled to Florida a half dozen times documenting stories of adults who had fled their country in political persecution.

Schmidt’s professional credentials as an oral historian and lead educator with Speak Truth to Power have opened pathways to her work with organizations across the globe. She has also launched her own advocacy and education effort, Ripple of Hope. Her book, A Voice for Writing, will be published soon.

'Tis the Season for Giving

Pamela Mary Schmidt is one of thousands of NYSUT educators who are turning out to help their communities with donations of food, time and money.

Each Thanksgiving, Schmidt works in a local park with Pronto, a food pantry and thrift center. Typically, she sits at the end of the food line, handing out coats she has gathered from friends and colleagues.

“By giving back to others we can fill ourselves with love and a sense of who we are as global citizens, and how we’re all interconnected,” said Schmidt, an activist, author and teacher belonging to the Freeport TA.

This year, due to COVID-19, most organizations have had to change their form of delivering meals to people on Thanksgiving, and food pantries have been hard pressed to fill bags and boxes with all that families need. Schmidt called a local church and got a list of food they needed for their pantry. Then she posted on her social media the days and times she would be set up in her car outside a local supermarket or at a local tavern owned by friends. Schmidt is delivering all the food to the church pantry.

TELL US: How are you giving in your community for Thanksgiving this year?


Let us know in the comments below!