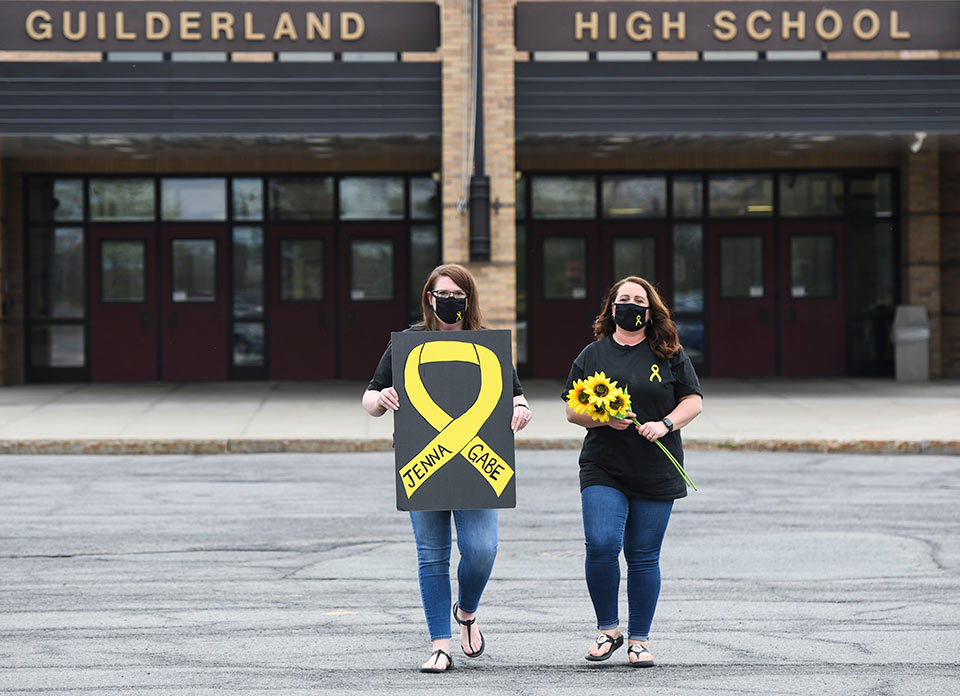 Thanks to the efforts of two teachers, on April 30 students in Guilderland schools will be participating in Rock Walk to raise awareness and support for two students battling a rare cancer.

High school students Gabe Zullo and Jenna Meier are in treatment for Ewing sarcoma. About 200 children and young adults in the entire country are diagnosed each year, according to St. Jude Children’s Research Hospital, and somehow the compass spun twice on Guilderland, an Albany suburb.

McNamara, who has Jenna in her junior English class, remembers when Jenna said she would be missing class because she had a doctor appointment; pain from a broken collarbone while playing soccer the previous summer was not diminishing. Startingly, a tumor was found on her collarbone, and she began treatment for Ewing sarcoma. Students found out her prognosis when a GoFundMe page was started by a relative to help cover medical expenses.

“The news was released and so with that, the kids brainstormed. Students were very upset with Jenna’s diagnosis,” McNamara said.

Gabe Zullo, meanwhile, is a student in Benner’s freshman English class. One day Benner noticed Gabe was attending her remote class from a car.

“Are you coming to school to pick up books?” she asked him. “He said ‘No, I’m going to chemotherapy.’”

The news stunned Benner and the students. Gabe had been diagnosed just as the world closed down due to COVID-19.

Students banded together and got Gabe a blanket that he could wear during treatment. He wears it when he attends class remotely during chemotherapy. Benner is the freshman class advisor. Students raised $1,000, and teachers raised $2,500.

Meanwhile, Benner approached school administrators to find out how they could help Gabe. She had no idea her teaching colleague and friend was going through the same questioning for her student.

“Even though we’re friends, we didn’t even know” we were each teaching a student with the same rare cancer, McNamara said.

They joined together to create a joint campaign for both families.

Students have been painting rocks at each elementary school, the middle school and the high school in preparation for a Rock Walk — the painted stones will be fashioned into a ribbon at each location. At the high school, the stone ribbon will initially be near the main road to the school for parents and the community to see as they drive by, or into the parking lot. After a few weeks, the ribbon will be relocated and set up on an elevated platform in the school courtyard.

“For years to come you’ll be able to see it,” McNamara said.

Many students are purchasing and wearing black T-shirts and masks with yellow ribbon designs created by art teacher Kyle Greene, Guilderland TA; the money raised will go to medical expenses the families incur.

The Rock Walk event will include providing students information about this cancer, which primarily affects children and young adults and is often mistaken for a sports injury. It grows in bones, or the tissue around bones.

“We solicited the help of Guilderland TA members in each building to help us carry out an awareness campaign that day,” McNamara said.

Also on April 30, students and families across the district will be posting or hanging their own paper, plastic or fabric yellow ribbons in front of their homes.

“It’s first and foremost to show community support for these two students. We want them to know they’re not alone. In the pandemic, there is so much isolation. They’re teenagers, and they’re in that demographic that’s already been so impacted,” McNamara said.

“We want them to feel the strength of everyone around them,” Benner said. She hopes the students see many, many yellow ribbons of support in people’s homes and yards when they are being driven to treatment.

McNamara also hopes that awareness about Ewing sarcoma will continue to grow, and future fundraising efforts may even open a path to help fund research.

“We don’t want this to be a one-year thing,” Benner said. 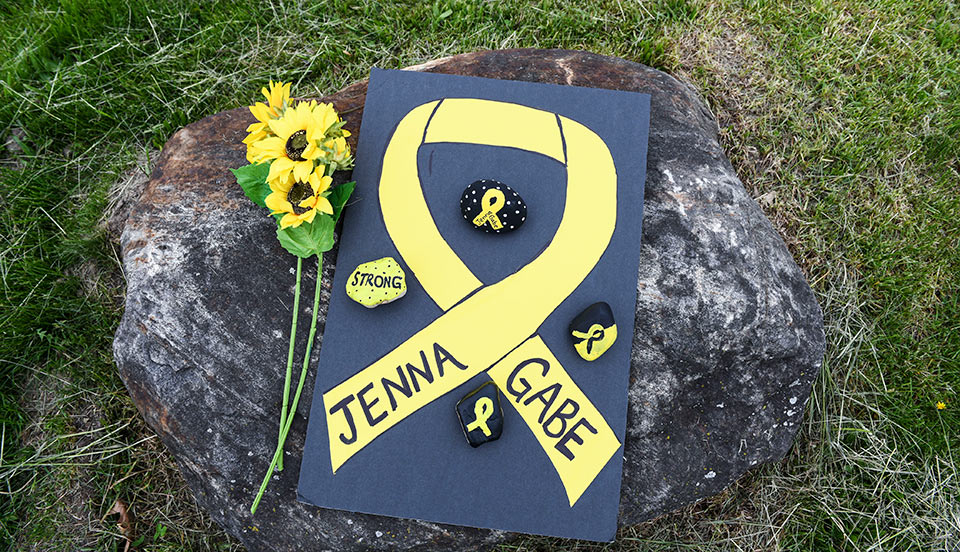