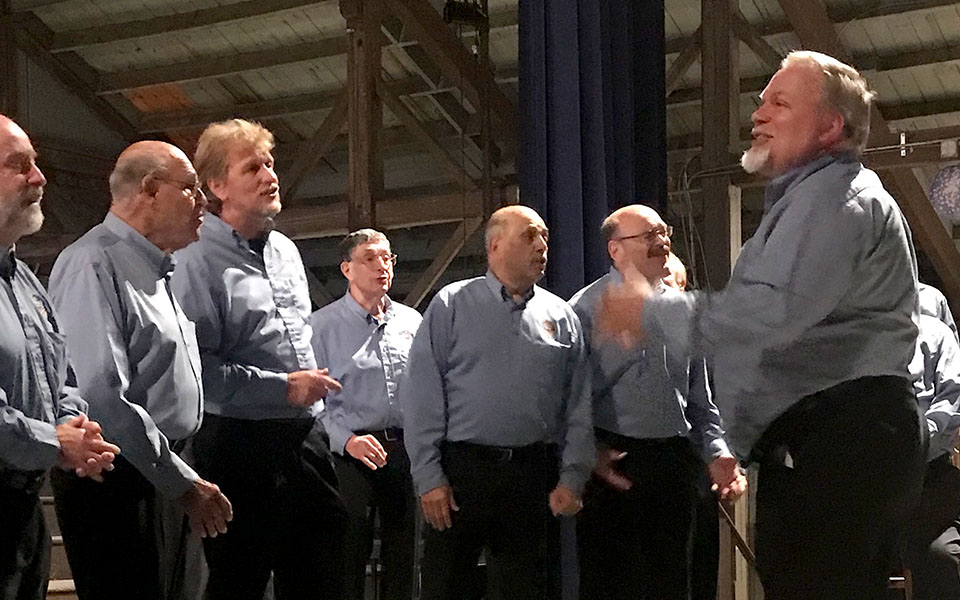 When Kermit Wamsley snaps his fingers, a lot of people snap to attention.

That’s because he’s a middle school band director, calling budding musicians and singers to action. He’s also front and center as a director for the all-male Electric City Chorus, an a cappella group that lifts spirits in its performances while raising money for charities and for music scholarships for students.

“It’s just helping out. That’s the way I was raised,” said Wamsley, a member of the Ravena-Coeymans-Selkirk Teachers Association. “There needs to be a lot more of making people smile.”

Wamsley’s own smile is abundant. He cannot contain it when he talks, or when he steps on stage, as he did in early October for the chorus’s first live performance in 18 months, due to the pandemic. The Electric City Chorus performed at the Round Lake Auditorium, singing everything from patriotic songs to “Sweet Caroline.” Proceeds went to help fund maintenance and repair at the National Historic Landmark.

Joining the group of singers was a spontaneous decision. He was shopping in a Capital Region mall one day when he saw the chorus performing. A sign informed people that the chorus welcomed new members. Wamsley walked up to the risers, stepped up, and began singing right then! In 2018, he became front-line director of the chorus, which was formed in 1944.

“I love harmony. I grew up singing hymns,” he said.

The chorus is structured on four-part harmony, and Wamsley can sing in all four ranges. The group performs at nursing homes and senior centers in the Capital Region, and is the finish line performance for the annual telethon held by the Center for Disability Services. They also perform at fundraisers and charity events.

While they sometimes perform for a stipend, Wamsley said the money goes to help pay for their expenses, their annual variety show, holiday shows and money for student scholarships.

The Electric City Chorus takes part in Youth in Harmony, providing a teaching quartet to perform in schools, educate students about a cappella singing, and answer questions.

Each year about 30 members of the chorus go out in groups of four as barbershop quartets for hire on Valentine’s Day. These singing Valentines lend their voices to love songs, performing in the work place, or on the front steps of homes. Wamsley said the money raised is used for donations to Habitat for Humanity.

Wamsley has been a school band director for 35 years; first in Taconic Hills, then in South Carolina, and for 16 years in Ravena.

“The best part of the job is seeing the growth of young musicians. Middle school is when I see them take off and grow,” he said.