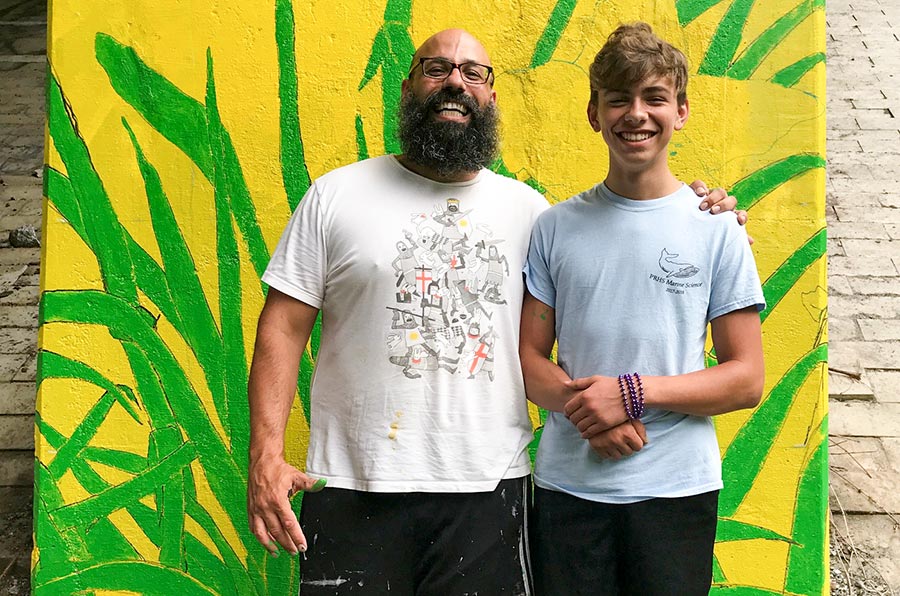 "It's not like working in your studio." Pearl River Teachers Association member John DeMarco with his son Caden taking part in the Mohawk Hudson Land Conservancy's "Art on the Rail Trail" project." Photo provided.

Instead of writing about what he did last summer, Pearl River Teachers Association member John DeMarco painted it.

In a crush of color, this art teacher spent part of summer 2018 on a bicycle and walking path in Albany County transforming a quiet underpass with paint and imagination. He was chosen in a competitive quest for artists to brighten up a section of the nine-mile Helderberg-Hudson public rail trail.

The artwork lifts the gloom from this dark spot on the trail, which heads into a low tunnel. His project was named “Full Spectrum.”

“I was mostly focused on the color; it was so dark under there. I was focused on the spectrum,” said DeMarco, who hauled paints and buckets of water daily from the Slingerlands Fire Department about a half-mile to the site.

The cement piers are now painted with a bright base of red, orange, yellow, blue, indigo and violet — their transformation starting with splattered paint.

“We used water gun shooters,” he said, laughing. “It’s not like working in your studio.”

“We” included his wife, Nyack TA special education teacher Tricia Crafts; their son Caden and daughter Evangeline; Pearl River TA member and art teacher Andrea della Cava and daughter Liv; along with volunteers from the Hudson Mohawk Land Conservancy, students, and random walkers on the trail who helped paint the base colors. The organizers of the project wanted community involvement.

DeMarco, who is a “very big fan” of abstract expressionists Marc Rothko and Gerhard Richter, said he used a combination of exterior paint and acrylic paint for the project.

“I was super excited I was chosen,” he said. ‘I’m really happy with how it turned out. I’ve got such a good response from people while working.”

He put in 12-hour days to finish all eight piers, and his son worked every day with him. 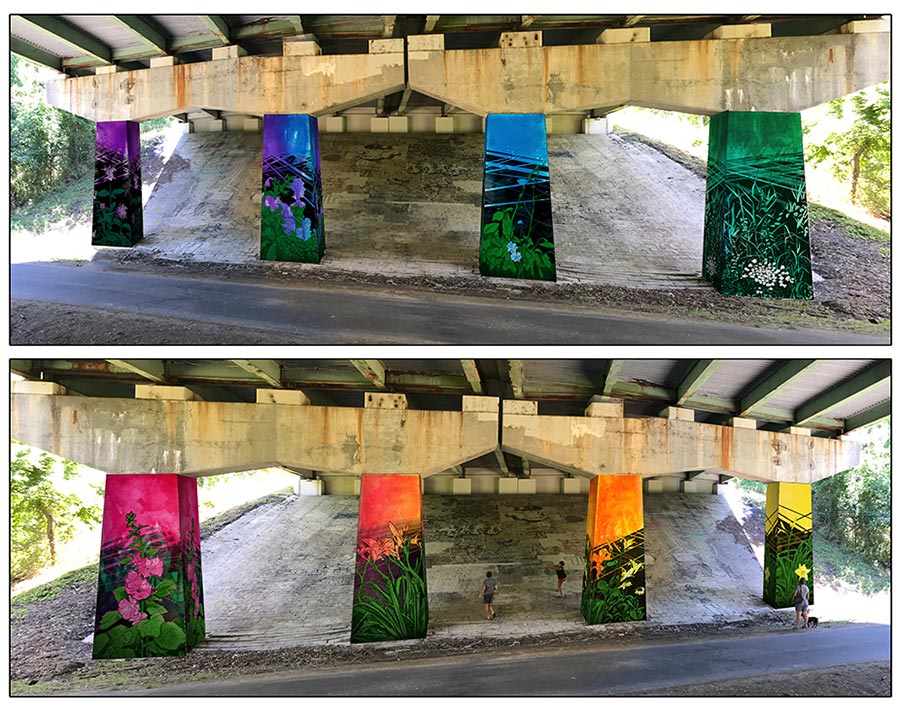 DeMarco has had his work exhibited at the New York Hall of Science in New York City this past year. He has also shown his paintings at the Garner Arts Center; Green Point Gallery in Brooklyn; Castle Fitz-John Galley in NYC; The Hopper House in Nyack, and the Andy Warhol Museum in Pittsburgh.

He is no stranger to large work or public art, either. He painted two other murals in Lyndonville in Orleans County – one as a community anti-industrial wind turbine statement; and one painted with a group of people on the subject of driftwood and fishes. He also painted a public sculpture for “Cow Parade” in Stamford, CT and a car for “Art-o-Mobiles” in Stamford.
And, he has donated art to the Rockland Center for the Arts as part of their “Full Circle” fundraiser, and the Pearl River Parent Teacher Student Association to raise money for student scholarships

DeMarco’s brushstroke verve is evident in school too, where he serves with science teacher Sheryl Palacio as co-advisor to a group of teachers and students painting indoor hall murals for the school’s ongoing beautification project. The art is based on the subject areas of the surrounding classrooms.

Each year graduating students paint an outdoor senior wall, working with DeMarco and della Cava to develop a design. That mural is painted on the handball court in one day, when seniors enjoy a barbecue on the site, and yearbooks are distributed.

DeMarco said the day is “absolutely hectic and stressful…. but also pretty epic.”

DeMarco also serves on the executive board of the Pearl River Teachers Association. “It’s good to be involved, and so nice to get an understanding of why there are unions; things you never would have considered.”

Teaching art is important to this man, who has guided students in creating stained glass, sculpture, jewelry, painting, computer graphics, photography and drawing.

“You have to come up with novel solutions to a problem. How you want to express a concern, or something important to you – the (students) determine for themselves,” he said. “Art has so many directions it can go in.”