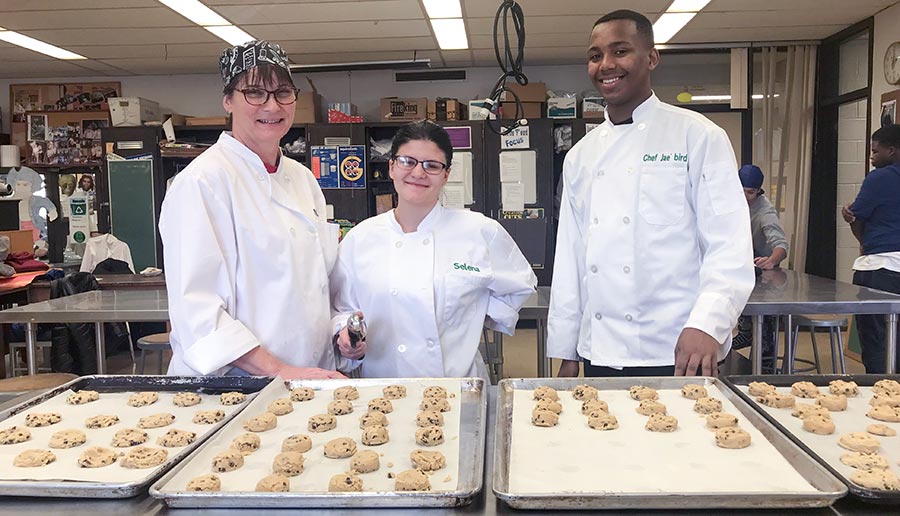 Laura Macey of the Schenectady Federation of Teachers (left) with her student chefs. Photo by Liza Frenette.

Laura Macey is very busy these winter weeks. Her high school culinary students are providing food for a 14-school wrestling invitational, and then finger foods and desserts for 200 people at the Schenectady Education Foundation dinner gala. Trays and trays of chocolate chip cookie dough have been scooped out and laid out for baking by student chefs in professional white coats. Crusts for tarts are being made ahead of time and frozen.

The warm ovens in the commercial kitchen are welcome on these bitter cold days.

So is the news that landed here recently: Macey was named Schenectady Teacher of the Year. Flowers, cake and balloons filled the kitchen classroom at Steinmetz Career and Leadership Academy, as did her family.

“I did not know it was going to happen. It was dress-down Friday!” she said, lamenting her diminished fashion attire that day. A member of the Schenectady Federation of Teachers, she has worked 27 years as a teacher.

Macey did not know a teaching career was going to happen, either. Although she earned a bachelor’s degree at SUNY Plattsburgh in food and nutrition – after working summers for a catering company on Lake George’s large tour boats – she initially pursued a retail career in Saratoga Springs. When the company faced financial struggles and laid her off, she started substitute teaching, and discovered a love of teaching.

“Gaining the respect of one child is like a ripple effect in the pond,” she said.

Macey finds it especially rewarding to teach in the inner city district’s alternative education school, located on a narrow street in a neighborhood bruised by poverty. The school was opened in 1992 as the Cities in Schools Academy for alternative education. The curriculum has expanded with the addition of technology for computer programming skills; graphic media; courses in business entrepreneurship and corporate accounting. The goal is for every student to be on a path.

“We had a stigma,” said Macey, noting that is starting to change. “Kids are choosing to come here for culinary. As our success with the program grew, more kids came into it.”

“She’s the heart of our building,” said James Keough, a colleague who teaches computer assisted drawing.

Macey began her career at Steinmetz working with pregnant and parenting teens, teaching parenting, child development and self-care. She also taught some family and consumer science courses, eventually stepping into the culinary program. Macey and colleagues brainstormed ways to expand the program, and they became more visible by catering events for civic organizations within the community. The program grew.

It's easy to see why. Sitting on a high stool at a long metal prep kitchen table after a full day of classes, still in her chef’s coat and hat, Macey passionately talked about the skills students are learning - such as baking, pastry, weights and measures, knife skills, and career exploration.

Four days a week they prepare lunch to sell to staff, including meatloaf, chicken tenders or turkey sandwiches. She uses the National Restaurant Association Pro-Start culinary curriculum and students are able to get valuable credentials like sanitation certification.

Nearby a student rinsed dishes in the kitchen.

“If you’re late for this class, you’re the dishwasher,” she said, grinning.

Another student came in, easing his backpack off his shoulders. He had agreed to a challenge to individually bag and label 600 cookies to be presented to parents at an evening presentation for eighth graders as part of their high school orientation. Art students will make the labels using the school logo.

“I didn’t like her at first,” said the student. “She taught me discipline.”

At these upcoming events, students will add to their cooking skills by learning coat checking, registration, plating food, and waiting tables.

Macey once had a student who was a drug-dealing gang member — and a wonderful student. She asked him why he was so different in her class.

“She’s done such a great job with her program,” said Schenectady FT President Juliet Benaquisto. “She cares about the kids beyond the goals of the program.”

“We’ve had school-wide picnics, back-to-school barbeques or harvest dinners. We provide things for students and the students’ families,” Macey said. “I’ve been very blessed to be in this building.“