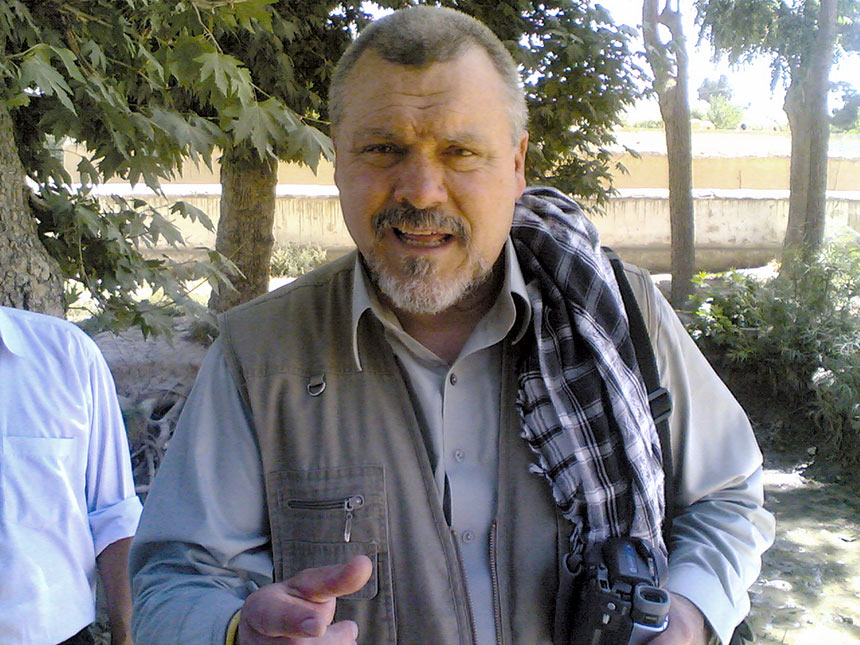 During his 40 years of teaching biology, anatomy and life science in Orchard Park, Tony Agnello was also busy experimenting with how he could improve the lives of others.

Now in retirement, he is strengthening and mobilizing community outreach through his work with the Peace Corps Alliance for Intercultural Understanding — doing so at a time in which democracy is under attack, and while fear and disillusionment reign.

“My personal intention is to spark the interest of teachers and community members to work with local Peace Corps and volunteer agencies, in stark contrast to the fear-mongering now happening in this country,” Agnello said.

Agnello is a Returned Peace Corps Volunteer who served in Afghanistan in the mid 1970s. After the terrorist attacks of 9-11, he became a leader of Orchard Park Educational Outreach, a high school service organization at Orchard Park High School. Through battles of the bands, car washes, dances and other means, OPEO raised money with dozens of high schools in western New York in support of female Afghan students who were denied an education by Taliban extremists.

And now, Agnello has resurrected his involvement in the Return Peace Corps Volunteer to counteract the scapegoating of marginalized people in this country and to re-educate people about the founding principles of our democracy. The foundation of his work as a Return Volunteer parallels the union work that he did for years as past president of the Orchard Park Teachers Association.

The three legs that make up the tripod of Peace Corps Alliance for Intercultural Understanding are education, advocacy and organization.

“I gleaned these concepts and I am dedicated to their importance through my earlier work with NYSUT, the American Federation of Teachers and the AFL-CIO,” said Agnello, who became active in the union shortly after being hired in 1975 and taking part a few days into his new job in what was then the longest strike in New York state history.

“During this protracted period, I became aware that only teachers can appropriately look out for, and safeguard, our professional interests,” he said. “Today, not only is the right to collectively negotiate the terms and conditions of our service being challenged (in wake of the Supreme Court ruling in favor of Janus), but so is the independence of the free press and the rule of law.

“The American Labor movement has been the most civilizing force for economic and social justice in the history of the world,” he said. “American unionism has raised more people out of poverty than any other force in human history, and it sets the standards through which non-union workers also benefited. If we mark the decline in numbers of union-represented employees, one would see an eerie parallel with the decline of the middle class. And that is not accidental.”

Agnello was recruited into a Teacher Corps/Peace Corps program through Buffalo State College and the Lackawanna School District. The program was specifically designed for the government of Afghanistan to reform their math, science and English education curriculums. Following the 1979 Russian invasion of Afghanistan — and, into the 1980s — he helped resettle dozens of Afghan citizens through the Afghanistan Relief Committee.

This retired teacher uses the knowledge from his international travels to help inform his work. Following his stint in the Peace Corps, he worked in Kabul for a year as the founder-director of a youth center. Then in 2003, he returned to his Peace Corps host country to oversee the outcome of a Western New York student fund-raising project that provided the resources for building two schools for Afghan girls. Three years later, he returned for a more ambitious visit to Afghanistan and oversaw the completion of four more gender-equity projects.

Agnello’s last regional project resulted in students from 20 schools in four districts gathering and sending a ton-and-a-half of school supplies to 10 school systems in Afghanistan.

Agnello also carries forward what he learned on the gridiron as a junior varsity and varsity football coach for four decades, by currently teaching senior citizens about movement, balance and resistance training through the Erie County Senior Volunteer Program. And though he said he might not be asking them to smash into tackling dummies, he does ask them to “go long.”

“I always end each class with what I describe as conscious breathing and smile yoga,” Agnello said. “Then I review why these apparently spiritual practices are in fact well-established, scientifically based wellness principles.”

“I intend to organize a human equity movement among RPCVs that will reintroduce the American Exceptionalism that President Kennedy envisioned in proposing the Peace Corps,” he said.

“Retired and mid-career RPCVs can dust off their intercultural and linguistic skills and demonstrate to our fellow Americans that marginalized and new Americans pose no threat to other Americans,” he said, noting that as the son of a Sicilian father, the immigrant experience and the prejudice of being described as “the other” was significant for him.

Agnello said he began the Peace Corps Alliance for Intercultural Understanding “to address the rising tide of Islamophobia and bigotry that was being ginned up during the 2016 election cycle.”

The group was formed at the request of the Afghan ambassador to the United States, Hamdullah Mohib, and by Vera Coppard Leibovic, a kindertransport Holocaust survivor, who told him:

"I have heard this talk before. You have to do something."

For more information on joining or starting a group, contact Agnello at tony@afghanconnections.org.