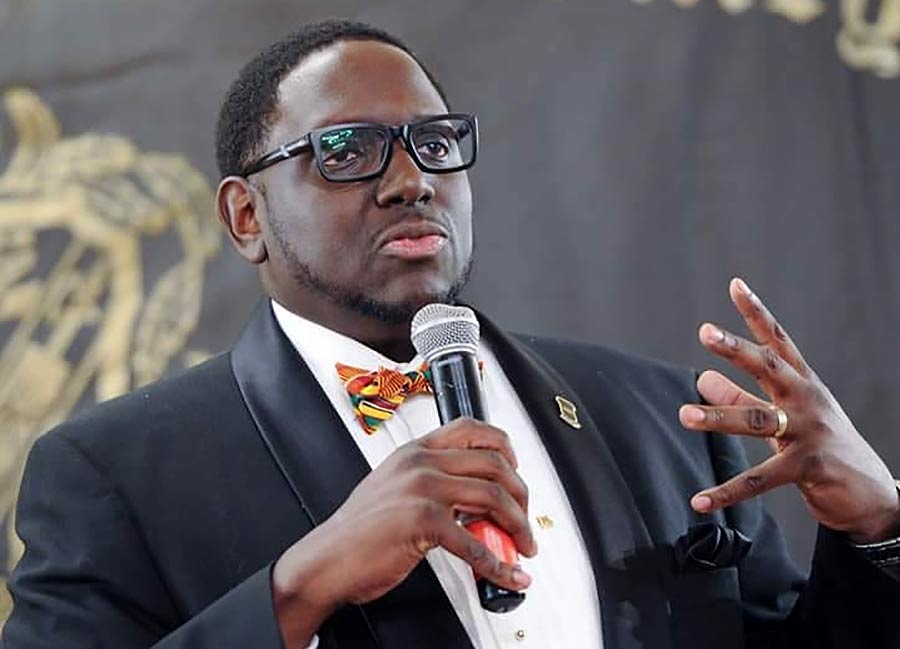 By day, Christopher Ellis works in a busy office building on a bustling block in downtown Albany, where he oversees adult learning centers for New York’s state and city colleges.

By night, by weekend, and by evasive minutes and hours here and there, he directs a new program — Collegiate Scholars of Tomorrow — that puts hope and college money into NY 529 College Savings Program bank accounts for third graders across the city.

“Some of this stuff has taken years to develop,” Ellis said. While many worthwhile organizations provide scholarships to graduating seniors, the goal of this nascent program is to “start the college conversation younger.”

A member of United University Professions, the union for State University of New York faculty and staff, Ellis is immersed in higher education every day. He witnesses its value for countless students taking steps to get to college, or to study a trade through adult learning at campus Educational Opportunity Centers.

The aim of the Collegiate Scholars Program, funded by corporate citizens and Albany Medical Center, is to kick start that goal. The new scholars program for economically disadvantaged third graders promotes relationships, family involvement and learning experiences along with financial incentives.

“We don’t just give money to kids,” said Ellis, a member of Alpha Phi Alpha, the sponsoring fraternity. “That’s not enough. There are children of many different ethnicities in the scholarship program, and it's important for them to meet successful, professional men of color.

“We communicate with them. We ask them to participate in mentoring activities and outreach,” he added. “We work with parents and teachers.”

The scholarship program is also available to graduates of The Baby Institute, a nonprofit program that helps children under 3 prepare for school.

The young participants start out with an educational account of $100 to $150. Money can be earned by attending educational events, or added by parents throughout the years and then matched by the scholars program. Even a modest contribution set aside in an account for a child makes it more likely they will attend college, Ellis said.

On the recent Super Bowl Sunday, kids were invited to attend a program with their parents about higher education, financial aid, and Educational Opportunity Programs.

One event that kids in the scholarship program are called on to assist is the Capital Region Soap Box Derby, where they help others build cars, or move hay for the race courses. Students also have been given opportunities to attend youth yoga, and take tours of Schenectady’s Museum of Innovation and Science. Some have been given career coloring books. In July, they took a day trip to Cornell for a campus tour, which included running through the football stadium whooping it up.

The roots of Alpha Phi Alpha began at Cornell in 1906. There has been a chapter in Albany since 1939, which still provides scholarships to high school seniors. A former scholarship recipient is Rep. Antonio Delgado, D- Kingston, who received one when he was 17 years old. Delgado returned to be the keynote speaker at the fraternity’s annual fundraising gala in January.

Ellis himself has been in some bright spotlights. WMHT profiled Ellis as part of its “Stories of Champions,” highlighting community leaders keeping students on the path to graduation. The profile acknowledged Ellis’s work as chairman and CEO of the George Biddle Kelly Education Foundation, the charitable arm of Alpha Phi Alpha. Kelly, a Troy native, was the first African-American registered engineer in this state, Ellis said.

The foundation provides rich information, resources, advocacy, programs and services to assist in the development of strong families in at- risk communities. That mission resonated with Ellis from his own upbringing, and he leaned in to join the action.

Ellis’s mom is a former public school teacher and school board member in Youngstown, Ohio. His dad worked in social services outreach programs for public housing, and then staffed group homes at night.

“Education has always been big,” Ellis said of his upbringing.

At Dartmouth, he majored in economics and African American studies. He earned his master’s degree at Youngstown State University, but said he could not find work in his native city. A college roommate was working in Albany, and urged him to give the city a try. He started working with the state Legislature on business tax policy .

Now his job is associate director for EOC Operations, University Center for Academic and Workforce Development. He oversees Educational Opportunity Programs at 12 across the state, from Buffalo to Long Island to the Capital District. Ellis describes them as centers that provide “middle skills” between high school and community college. All programs are free, and include high school equivalency tests, English as a Second Language, construction, welding, barbering, culinary, and allied health (dental, pharmacy and surgical technicians; certified nursing assistants.)

His volunteer work has flourished, even as other life commitments have deepened with a wife and two children, including a newborn. Fortunately, Ellis will get a bit of a breather now that his term as statewide president of the fraternity has ended.

His earnestness about making change for young students is apparent as he unfolds his tall body from a chair and straightens his suit, choosing the best words to explain his community involvement.

“Despite some of the scary statistics and stories we may hear, a little investment in the children of our community can produce fruit,” he said.

“There are teachers who already believe that their students, despite their backgrounds and socioeconomic situation, have the ability to be successful, if given a chance and a little extra energy. We are here to help. We are a resource. We welcome feedback and insight.”