With VetDogs, retired teachers help to pair vets with pets

Since Service Dog Charlie was placed with U.S. Air Force veteran Stacey Pearsall live on NBC Today in November 2017, requests for dogs from America’s VetDogs have increased. Screen capture via the Today Show.

Who let the dogs out? 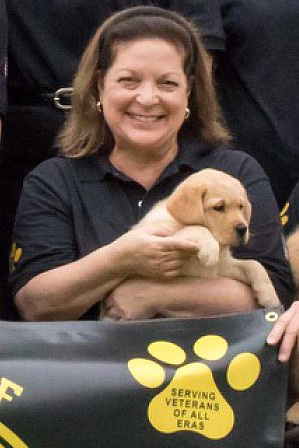 No, not the Baha Men. This time it’s a group called Friends of America’s VetDogs that are raising money to help get puppies bred and trained for veterans and first responders in need. Retired teacher Patricia Summers (pictured at right) of United Teachers of Northport is the Friends pack leader.

In just 36 months, the group has raised enough money to sponsor and name 12 dogs. They are being bred, raised and trained through America’s VetDogs programs and then matched with veterans of war and first responders who need canine care for physical, mental and emotional challenges.

The service dogs bred at this nonprofit organization are Labradors, golden retrievers, lab/golden crossbreeds and standard poodles (for veterans with allergies) – all destined to leave positive paw prints on many lives. America’s VetDogs is a sister organization with Guide Dogs for the Blind.

Summers started the project with her partner, Cliff Miller, and a small cluster of friends on Long Island. The group has now grown to 22 people barking out their exciting news at large-scale garage sales, gift auctions, art shows, comedy club nights out, and other fundraising efforts.

Summers, who describes herself as a “proud union member,” taught Spanish and Italian to students for 35 years, but now she’s all dog-speak.

Prior to starting the group, she was a donor to America’s VetDogs. Then, while attending one of their fundraisers, she heard a veteran speak. She was Carolyn Jette, a newlywed veteran who started having 30-35 seizures a day. Doctors and surgery did not stop the problem. She lost her commission, her husband and her home.

“She was back home living with her parents, curled up in the bed,” Summers recalls Jette saying. Eventually matched with a dog from America’s VetDogs, the animal was trained to alert her to a coming seizure by detecting enzyme on her skin. This allowed her to give herself anti-seizure medication.

“From the day she’s had the dog, five or six years ago, she’s not had a seizure,” said Summers. “We met her, we met the dog. We saw the tangible results of how your life can be changed ... I’ve always done charity work, but this really hit a nerve. Every veteran deserves to have that experience.”

Their families have veterans in the family tree. Miller’s father was an Army veteran of World War II and Summer’s uncle served in Korea in the Marines.

Following the talk they heard, the couple took one of the biweekly tours at America’s VetDog and met some of the trainers, veterans and handlers.

“We researched the great work they do. That’s when we founded Friends of America’s VetDogs. We had a yard sale and raised $1,000 in one day. Every penny went to them,” said Summers, who ensconces herself in fundraising projects like a dog lover burying her face into an animal’s fur.

The service canines are trained at the facility – where mock restaurant tables are set up as part of the environment – and in prison programs and with volunteer families to meet the specific needs of the veteran. These smart animals can turn on light switches, or pick up a dropped phone or credit card for veterans with mobility problems. They interrupt veterans with PTSD by barking, pulling on a loop on the owners’ blanket, and then getting into bed with their owner to provide safety and calm. Certain dogs are trained to be their owner’s ears, alerting them when someone is at the door, or when a car is coming while they are walking.

Serra connected with Summers after meeting her at a Sons of Italy event.

"We bonded because she was also an ex-teacher," Serra said.

When Summers wanted to create the Friends group, Serra, a former family and consumer science teacher, was all in. She already had a stake in the value of service dogs.

Her cousin was once a teacher who caught her foot in a student's backpack, tripped, fell, and sustained a traumatic brain injury, Serra said. Following a lot of rehabilitation, she now relies on the help of a service dog to help her with episodes related to her TBI.

"The dog alerts her to sit," Serra explained.

Many members of the Friends of America's VetDogs have a connection to either dogs or to veterans. Serra's own father, Anthony Messina Sr., was a decorated soldier in the Army in World War II, where he was injured. He wore either his Army jacket, or volunteer fireman jacket, throughout his life. He also wore a War Veteran baseball cap for years.

"He was proud of that. He was a member of the VFW," she said.

Serra and company are already busy getting baskets ready for the April auction, where gift baskets full of prizes are sold to raise money.

"We all go around to get donations," Serra said.

A big draw of the evening is the bouncy presence of puppies and dogs who come from America's VetDogs to show off their stuff.

It takes more than $50,000 to breed, raise and train a dog, including veterinary bills, food, transport and two weeks of housing for a veteran to come to Long Island to receive training with his or her new dog, says Jaime McGrade of America’s VetDogs. The dogs are housed on the 10-acre campus in Smithtown on Long Island.

Since Service Dog Charlie appeared as a puppy on the NBC TODAY show, and later placed with U.S. Air Force veteran Stacey Pearsall in November 2017, requests for dogs from America’s VetDogs have increased.

“We have a waiting list,” said McGrade. The Long Island facility is where 300-400 dogs are bred a year for both America’s VetDogs and Guide Dogs for the Blind.

For $6,000, a person or group can sponsor a dog and have the privilege of naming it.

Summer’s group has taken that privilege to heart, carefully choosing names through diligent research to honor Long Island veterans. There is Service Dog Florence, named for Lt. Florence Evans, a U.S. Army Nurse in World War II; the only Long Island female killed in action during that war, accord to Friends.

Ruby honors Col. Ruby Bradley, a U.S. Army nurse who served in both World War II and Korea and was nearly killed twice while saving others. She is the most highly decorated female in U.S. Army History, according to the Friends group. Service dog Ballard honors Col. Donald Ballard who served as a U.S. Navy medic in Vietnam and jumped on a live grenade, saving three U.S. Marines.

The names and actions live on in the work and companionship of these dogs, who serve the men and women who served America.

At one of the fundraising events, a man approached Summers after seeing a photo of Col. Ballard, explaining in delight that he had served with him.

“This is all validation we’re doing the right thing,” said Summers, who also makes appearances with Miller and service dogs to civic organizations as part of a Speakers Bureau through America’s VetDogs.

Anyone who sponsors a dog gets to follow the dog’s progress in updates that come every three to four months.

Although the dogs can be matched with America’s veterans anywhere in the world, the Friends group is fortunate enough that one of “their” dogs — Sarge — ended up at the nearby Northport Veterans Hospital, where he helps veterans with their physical therapy. He is named after Sgt. John Basilone who served in the Marine Corps in World War II, and was killed in action while saving others. Basilone received the medal of honor.

Trained dogs who do not end up qualifying as service dogs for veterans are used for different programs, including securities dogs; breeders; and detectors with the Bureau of Alcohol, Tobacco and Firearms to sniff out explosive or accelerants. McGrade said when a dog is done breeding, it can be returned to the family who trained it.

America’s VetDogs also uses inmates in prison programs in Florida, Massachusetts and Maryland, among other states, to train the service dogs Monday through Friday. On weekends, volunteer families take the dogs to acclimate them to homes, shopping malls and movie theaters – public places where their future veteran owner take them.

The organization reports that they do not receive regular government funding, but do receive occasional government grants and rely on contributions of individuals, corporations, foundations, businesses and service/fraternal clubs. Students from elementary through college have also donated.

“We need to help those who protect us!” said school nurse Carol Salvo, a member of Local #237 Teamsters Union who volunteers with Friends.

Summers said her work with Friends is nearly a full-time job. Some of it can be done at home, where she hangs with her 14-year-old pit bull named Gilbert.

And certainly, she’s earned her own form of dog tags.

To learn more, or to make a contribution:

WHAT'S IN A NAME? 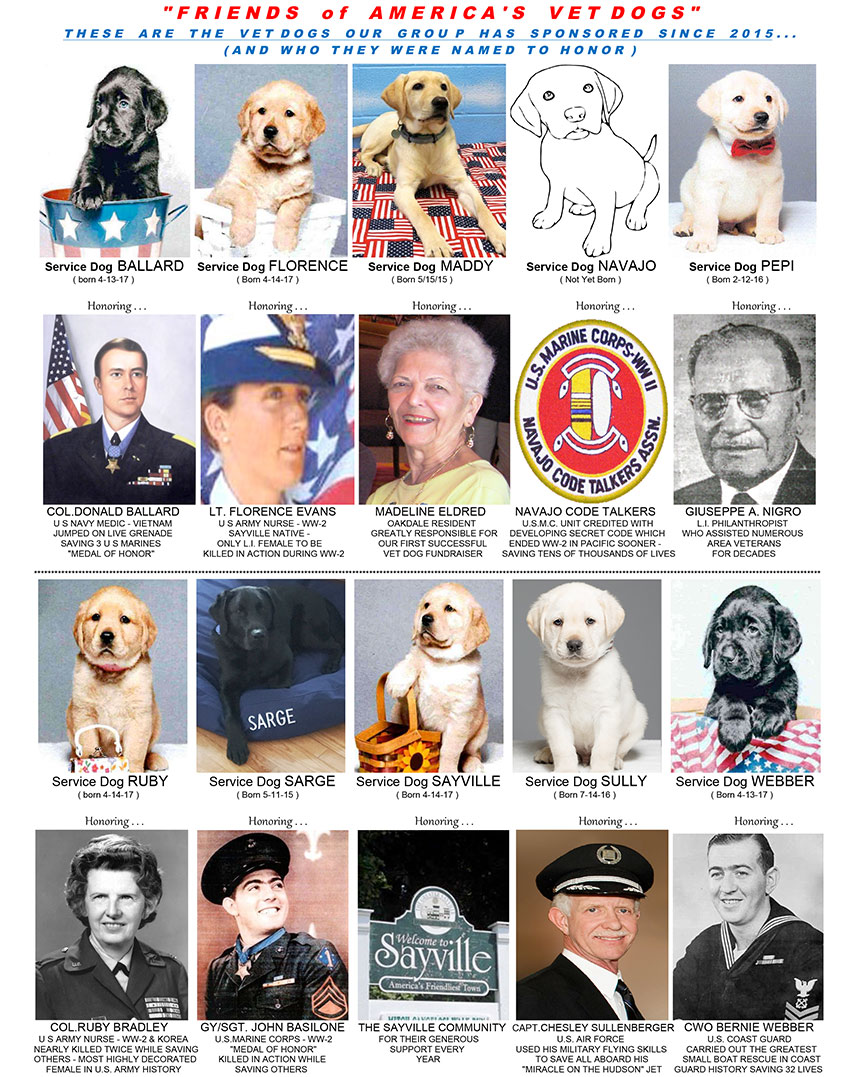